Leitrim’s second leisurely hiking and cycling festival enjoyed fabulous weather over the solstice weekend. Hosted by the villages of Manorhamilton and Dromahair the festival attracted visitors from near and far with touring cyclists visiting from Argentina, New Zealand and  America, with more local visitors cycling from Kiltoghtert, Boihy and Rossinver.

There was something for everyone at this festival, kicking off on Friday evening with well attended talks by William Bennet and Mary Russell in the Glens Centre.  William Bennett entertaining the audience with tales of adventure, and photographs, from his three year round the world cycle. Travel writer Mary Russell spoke about her travels in Syria before the war.

Some of the festival cyclists camped in Manorhamilton that night after the talks.  Manorhamilton’s Community Cafe, the Castle Cafe, opened it’s doors and grounds to the visitors on Saturday morning, the garden was a beautiful intimate setting where festival goers congregated. Events on Saturday morning included a touring bicycle display and a printing workshop run by Manorhamilton print group.  For the energetic there was a morning cycle run in the hills surrounding Manorhamilton, the cyclists commented on the beauty of the area and the steepness of the hills. By mid morning Paddy Bloomer’s “Scary go Round” , like a scene from a funny children’s story book, was in full swing, accompanied by music by the ‘Knotted Cords’ from Waterford.  Margaret Connolly led a fascinating historical tour of the village. There was a family cycle to Lurganboy where the Woods provided a beautiful environment for a picnic.

Mid-afternoon cyclists mounted their bikes again and, once more, took on the challenge of the Leitrim Hills, heading for Dromahair.  The route, chosen for quiet roads and scenery, went via Lurganboy, Shanvas Cross, on to Parkes Castle and along the lake to Dromahair, showcasing the unique beauty of North Leitrim in the afternoon sun.  After setting up camp in DARC, Dromahair visitors explored the village, stopping in local shops, restaurants and pubs for sustenance.

Later that evening with 15 tents pitched, most of the cyclists hit off for a bit of dancing and craic at the crossroads being St. John’s night, where there was music, singing, eating, chatting and dancing with a few talented cyclists joining in the entertaining.

The cycle back was magical, we were like a caravan of cyclists in a tribe, pedaling back in the dark to the village in terrific spirits full of the joys that infects the spirit by being on a bike!!

Up and about early as the sun shone warm on the tents and enjoyed a tasty freshly cooked barbecue Irish breakfast to set everybody up for the day ahead on the greenway where circus themed costumes entered one in a fancy dress competition. Bikes got decorated as well as helmets and babies before assembling at the ‘Demo Stretch’ at 2pm for some theatre by the Rabbit’s Riot about a grown woman who cannot cycle but has grown a steely determination to do so by June 2019, so watch this space!

This was followed by a ‘parade of cycles’, bicycles, tandems, unicycles, folding bikes, black nellies, tricycles were wheeled past the judges who had the challenging task of choosing the best dressed cycle and cyclist.

There was a trombone player beating out a tune from the lofty heights of the ‘Twisted’ beech tree as the slow bicycle race course was measured out and ribbons put in place underneath. Around the corner at Edergole Cottage the Old Market Street Swing Band entertained the crowd gathered who enjoyed home made scones and tea served in the marquee.

The next treat in store for the crowd was the launch of ‘Gluais Linn’, Dromahair’s very own trishaw which was cycled over the adjacent stony bridge with 2 distinguished passengers enjoying the experience of gliding through the beautiful countryside in the sun.

The Cycling Festival came to a close as the cyclists took off to the band’s aptly chosen ‘King of the Road’. 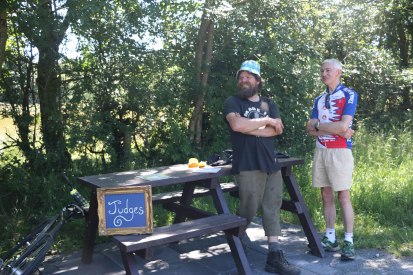 The first year of the festival took place in Battlebridge. Here are some photos of the 2017 festival:

I can fix a puncture but only have a rudimentary understanding of the mechanics of a bicycle.

My beautiful leather hiking boots rarely come out of the cupboard.

But I love walking and cycling.

For the last 2 years I’ve been living in a small town where I walk miles every day, usually with dog and buggy/sling/small hand in tow.

Amazingly I got a job with Cardiff Council managing the cycling programme for the city. This meant I was allowed to work on strategic plans to make the city better for cycling, applying for funding to make it happen and then making sure it happened. I got to be part of an exciting change in the city and saw it start to reach its ambition to be one of the top cycling cities in the UK.

I was also part of the team that worked on another exciting change – the Welsh Government Active Travel Act – which means every local authority now has a duty to plan, create and maintain walking and cycling networks in their towns and cities. Imagine what this could mean for the country if and when it starts to be realised.

Now I’m living in South Leitrim where it’s not so easy to cycle many places – especially with a baby on board. And it’s difficult to meet people who would like to be able to do more leisurely, utility cycling and want to help make it easier for more people to cycle more often.

So what better way than a leisurely hiking and cycling festival that brings such people together to share info, share routes, share ideas, build a community and hopefully have some fun.

Save the date for Leitrim Cycling Festival, 19th to 21st of May, 2023. We are bringing the festival to Ballinamore and we are very excited!!
What a weekend! Huge thanks to everyone for coming along and especially to the support of @leitrimlsp and @enjoyleitrim Thanks also to everyone who helped out, there was a lovely community feel to the whole weekend, and what a venue! @loughallenadventure 💚🚲💚🚲💚🚲💚🚲💚 #bikeweek2022
Slow bike race final 2022, the suspense! Always a festival favourite. Time to start training for next year 😆 thanks @haphazardneas for the footage and the commentary! #bikeweek2022